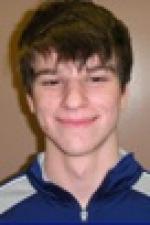 Bio: Luke O'Connor is the youngest of 4 brothers and enjoys lazing around when he is not playing sports or games.  He has been on the Honor Roll all 4 years he has been at Jones in addition to being a varsity athlete in track and cross country.  Luke also enjoys long runs by the lake and is always in the mood to immerse himself in nature- Luke is a big fan of cross country, especially its use of nature's obstacles.
2012 XC- Had a breakout season smashing the 15 minute barrier.  Sectional champion running 8th fastest time on historic Fenton course.  Finished All-City (2nd), All-Sectional (1st) and All-State (8th).  Also finished 23rd in the entire Midwest Region running independently for Chicago XC Club at the Nike Midwest Regionals.
2012 Track- Luke dramatically improved his times in both the 1600 and 3200m runs and ended the year winning heat 2 of the 3200m run at the IHSA state meet by over 12 seconds.  The time of 9:33 in 90 degree heat placed him 5th over all, making him Jones' second ever All State runner.  He also placed 3rd in the 1600m run at the Chicago Public League championships.
2011 XC- Luke took nearly 40 seconds off his PR at the ACC Charger Classic and finished the year as Jones' second man on the 7th place IHSA state team.  In the process he finished first team All-City and All-Sectional.
2011 Track: Coming off of swimming, Luke ran PRs in both the 1600m run (4:39) and 3200m run (9:58).  Luke garnered all city honors in the 1600m and all-sectional honors in the 3200m, narrowly missing the final state qualifying spot.
2010 XC: Luke led the Eagles as an assistant captain and PRed in his very first meet by over 20 seconds.  Luke ended the year with all-city and all-regional honors and a huge PR at the state cross country meet (15:49).
2010 Track: As a freshman, Luke beat his brother Patrick's mile best and set strong freshmen PRs in the 1600m (4:46) and 3200m (10:29).
2009 XC: Luke came through as Jones' second runner, earning medals at the Pat Savage invitational and Nike Northside-Southside Challenge.  Luke helped lead the Eagles to their first State Cross Country meet, becoming the first CPS boys team to qualify since the elimination of automatic qualifying.